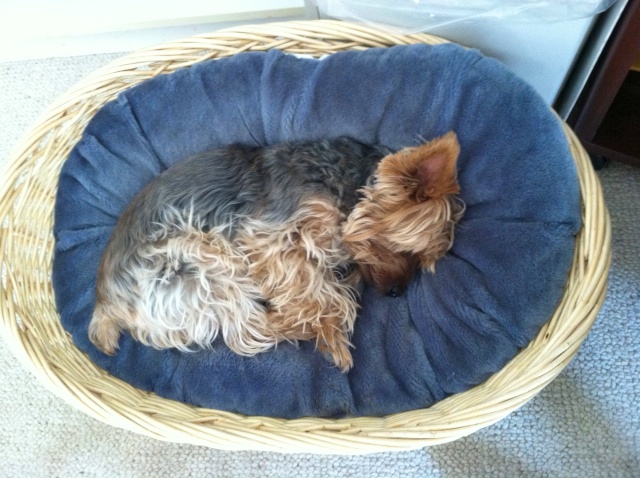 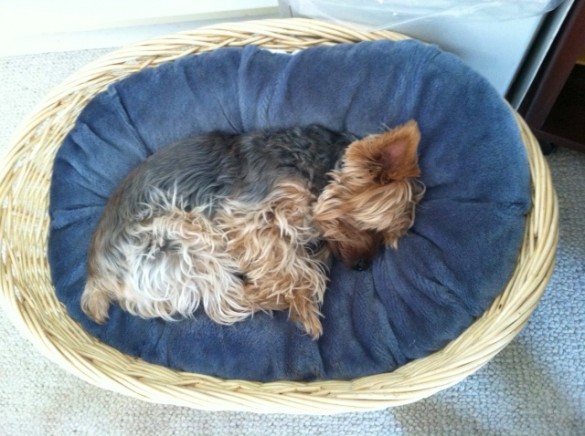 It’s two in the morning, and I walk in the dark through a piñon forest. My heart pounds with fear as I sense coyote and bobcat eyes watching through branches I can barely see in the dim light of a sickle moon. I am walking through the biggest fear I have about my mother’s passing besides the sadness: inheriting her dog, Mischief.

He is like the Tasmanian Devil. A Yorkshire Terrier, he exerts energy in all directions, jumping on and over furniture, across the dining room table and onto the bed. He pees on the carpet and couches. He whines whenever he loses the center of attention.

Now, in the forest, he leads me between two huge piñon trees as he sniffs through the darkness, not lifting his leg to pee, so we can go back inside and to bed. Instead he roots around, darts here and there, tugs on the leash. I chant my word to engender patience and then whisper, “Pee, Mischief, please.”

Suddenly to my left, a whoosh rises from a tree, followed by frantic flapping. My heart leaps into my throat as what sounds like a Pterodactyl takes flight. I lose my word and instead grab the dog roughly and carry him to the front door. I plop him down, wanting to scream out at the star-speckled sky. Instead, I take him inside, open the garage door and say “If you have to pee, do it in there,” and I head back to bed.

I detest my anger, and now it keeps me awake for hours more.

This is the very scenario I feared. I’ve loved Mischief, but known that we aren’t compatible. A month ago, when my mother passed away, I quickly set about finding him a home. Within a week I did, but the man called at dawn the next day asking me to pick the dog up. Another possibility arose. Mischief remained at that home for five days before the call came to come get him. I returned him to the kennel, where I would visit to take him for walks, unwilling to let him destroy my house or my peace.

Then he got an eye infection, and I had little choice but to bring him home. I drove to the pet store and purchased a doggie diaper that I strapped on him. Then we went to my house, and with a dry mouth and pounding heart, I opened my door to him. Very soon he lifted his leg on the corner of the couch, but the diaper stopped the mess, and thus his first real lesson in this creation came: He wet himself.

I began working with a trainer, who helped me teach the dog not to whine. As I cooked dinner, I would stand and chant my word while he whined and whined for attention. Finally, when he stopped and settled onto the floor I would turn, kneel and pet him. Slowly he came to understand that there are better ways to find love.

Then I saw the reflection. Especially during this time when I am so vulnerable, my lower self wants to create mischief. It seeks attention through jumping around and whining. It thinks it can’t do the tasks before it—convene some 16 family members and disperse my mother’s treasures among them, hold a memorial celebration, and clear out my mother’s house. At times I miss her, and only want to fold into a ball on my bed.

I see that I can have my sadness, but I must do with the self-pity the same as I do with Mischief’s whine. I acknowledge that it’s present, but don’t give into it, don’t bow to its illusory needs. Instead I stay with my Beloved until it quiets—and it does quiet. In fact, it disappears into the love. I see that I have nothing to fear, and that I can meet every challenge. And I do. The family arrives and I help disperse my mother’s possessions to them, the memorial party convenes old and dear friends in an atmosphere of love, and the house, in its time, is getting cleared.

In the following days, miraculously, Mischief quiets down. I have him on healthy food, and he seems to understand that he does not have to act out to receive love. In my newfound quiet, I recognize that I stand above the lower creation. Nothing relies on it. I merely channel the love and attention to it.

In the next weeks with the Beloved I surrender, become willing and happy to keep Mischief here with me. I grow to like the idea, plan a fence on my property. I come to appreciate the way he tucks in close to my body at night, the way he follows me from room to room and looks up at me with pleading brown eyes. 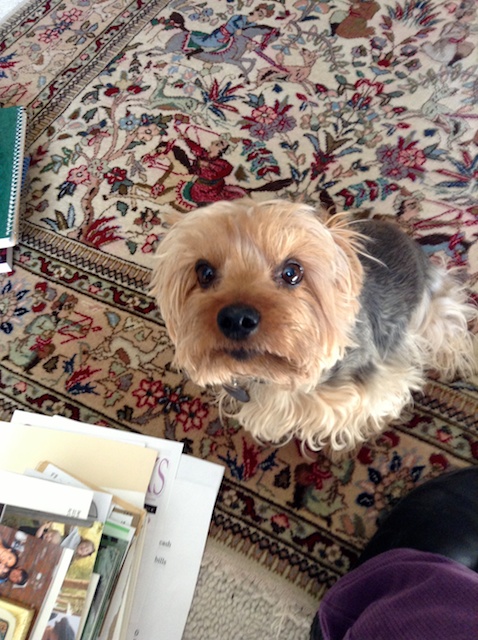 Then one day an email comes. An elderly woman is interested in adopting him. My heart sinks with the idea of losing him. But I surrender and take him to meet Barbara (same name as my mother). It isn’t what I hope. She lives in low-income elderly housing and doesn’t have a yard. And yet, when she meets him, she immediately loves him, for all of him—his rambunctiousness, his swarthy boldness as he jumps up on her coffee table and sniffs around, and she loves those pleading brown eyes too.

In the coming days I explore other options for Mischief. I put an ad on Craigslist. I’m honest with each caller about what a handful he is. I interview a woman from Taos, a couple in Nambe and a man in El Paso, all interested. But none of them say, as Barbara did, “Yes, I really want him.”

I keep releasing to the Beloved, asking, asking, for what is best. Since I have quieted the inner mischief, I am able to hear. One day I feel certain that Barbara is the one. I take Mischief, his food dishes and toys to her apartment. While there, I meet the neighbors who share a broad courtyard with her. They are as excited as she to have him in their community, and of course Barbara swoops him up in her arms and kisses his forehead and belly. “I love him already,” she says.

I return home happy for his new life, yet sad he is no longer in mine, except for occasional visits. But it feels right here. My home has returned to the sweet, contemplative space that I have fought a lifetime to create.

In the evening the phone rings. When I hear Barbara’s voice, my heart sinks, assuming she wants me to pick Mischief up. But instead she launches into the tale of his first day in his new home. The neighbor Della insisted on walking him. Then Barbara took him to the grocery store and wheeled him around in the cart. “He was the center of the party!” she says, explaining how everyone came up to greet him. As we talk he lies next to her in bed with the AC and television going, just like it was at my mother’s house (though he no longer pees inside). “I am thrilled with him,” she says.

Suddenly I see: The Beloved only wants us to be ourselves. I could have kept Mischief and tried to make him fit here in my life, but how much better that he be in a place where he is loved for who he is. I too get to be who I am, whenever I trust the Divine guidance.

We are the greatest of adventurers, exploring the complex landscape of our fears and desires. The treasure we bring home is our true Self: pure love.

P.S. Loving thanks to my subscribers. If you would like to receive posts in your email inbox, please sign up below.