Dive Deep in the Ocean of Love 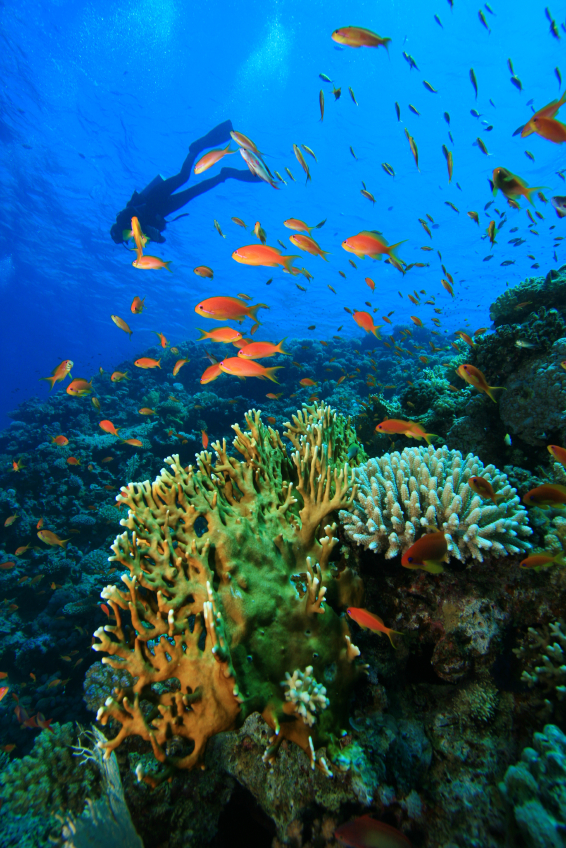 My very first glimpse of a reef woke me to a new world. As I relished the warm water and hung weightless, my eyes took in a fairyland of colors and my being filled with transcendent bliss. Over the years, I’ve found that exploring the ocean’s depths can teach me a lot about penetrating my own uncharted inner self.

When I explore my thoughts, feelings and imagery, I let the Divine in and thus open my life to more love and bliss.

Whether I scuba dive on a coral reef off Mexico’s Isla Cozumel, delve into a shipwreck off Bali or bushwhack through kelp forests of California’s Catalina Islands, my routine always remains the same.

Secure my Support  Diving is highly dangerous. Not only does a diver contend with deep waters, unpredictable currents, and wild creatures, but unseen forces such as pressure can cause potentially fatal bubbles in one’s blood. For this reason, a diver has perfect gear and always a buddy. Even before I tip backward into the water, I have checked my buddy’s gear and he has checked mine. And once I splash in, we signal safety to each other.

Doing a spiritual exercise each morning is much like preparing my gear and checking in with my buddy. I start my day with a reading that helps lift my consciousness into a higher place from which to view inward.

Some might argue that the path home is written within their very body, so why read, why have a teacher at all? It’s the same reason I have a buddy when diving. I can go alone, but the way is much more certain when shared with another, especially someone who has been there before and already knows the direction of the currents, the kinds of sharks one may encounter and, best of all, the way back.

Remain Fingerless  Once I have sunk to a depth of 40 to 60 feet, I start exploring. The world around me comes alive. I see fuchsia and azure coral, purple fans and schools of parrotfish. All the while I never touch or grab. I only look with wonder at the great bounty the ocean reveals.

Similarly, once I have done my spiritual exercise, I can head into the world with an attitude of detachment.

I see the beautiful coral, but I don’t grab onto it. I encounter an eel, but I don’t run. I simply move along, noting each piece of myself, recognizing that these are simply parts of me, the same way the coral and eel are parts of the ocean.

Years ago, I used to be tormented by jealousy. It had the capacity to steal my attention for weeks at a time. One day it arose with terrific ferocity. I went for a run in the mountains, and while I ran, I called on the Divine and let the various viewpoints arise. I saw that my mate had his own life to live. I saw that I was safe and loved no matter what he did. I saw that my partnership with him was only a part of my life—I also had my work, friends and family.

When I got to the top of the trail, I stood still in the sunshine and felt the hurt clench my stomach and heart and I yelled at the jealousy. “Is that all you’ve got? Is that all you’ve got?!” The intense feelings suddenly dissipated. Jealousy could not hurt me. It was but a feeling, an illusion.

Be Directionless  Unlike most sports where movement is key, diving is generally directionless. You don’t speed along a reef or wall. Instead you relax, breathe lightly and simply meander or don’t move at all. You hang weightless.

Similarly, when I enter my day after a spiritual exercise, I do so without an agenda, without trying to protect any viewpoint. In my exploration of jealousy, I was not trying to see how my mate was wrong and I was right. Instead, I just let the many different viewpoints appear. I need not run from anything, nor run to it. The images that bubble up are really a dream to show limitations and open a broader viewpoint.

Once, when diving off Honduras’ Roatan Island, I was 60 feet down, perched along a wall that stretched hundreds of feet below me. Before my eyes swam angelfish among staghorn coral and sea anemone. I sensed a presence and turned my gaze toward the limitless blue/green ocean behind me. Out of it appeared a dark spot—a creature. I couldn’t tell what it was, but as it drew toward me, it grew larger. My heart beat so hard I could hear it inside my regulator.

When a karmic part of myself appears, it seems as ominous as a killer shark. My whole being grows weak with a sense that I cannot face it, and I certainly can’t overcome it. It is too large, too ruthless. But when I call on the Divine and am willing to look at it without running, without trying to change it, a miracle happens. Sometimes it takes only moments, sometimes it takes weeks or years, but one day it becomes neutral.

Ever since I faced my jealousy, it has rarely visited me again, and never with that kind of force.

In Roatan, that dark creature swimming at me out of the depths took on a shape. It was as large as VW bug and swam with surprising swiftness. My heart beat faster and faster, until I saw a shiny green shell, an outstretched neck and legs paddling.

It was a turtle.

It continued to swim toward me, its face coming so close that our eyes met in friendly recognition before it banked in a turn and swam away.

My teacher, Sri Gary Olsen, calls karmas “puffballs.” Sometimes they may be like turtles. When I’m willing to face them, I see the truth. All my fear is little but emotion or discomfort, feelings I can easily endure. When I sit quietly with them, they dissipate into the blue. Each time I face one and move through it, I travel deeper into my true self—an ocean of limitless bliss.