You Are the Sun Shining Unconditionally 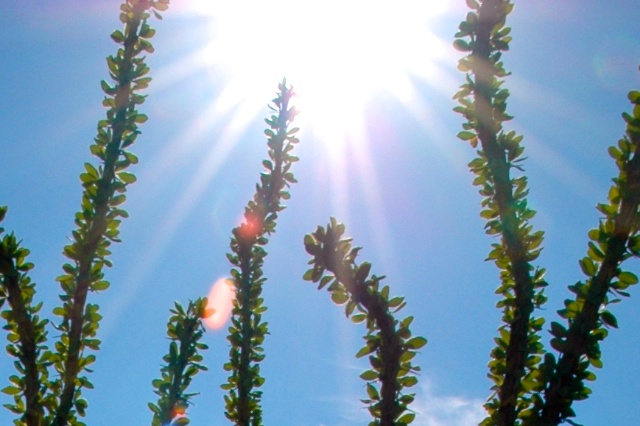 As the days grow longer, you may find yourself shining more brilliantly than ever. Like the Earth’s sun, you are self-generating, with the Divine radiating from you. This is the same power that fuels and creates everything in the cosmos and the cosmos itself.

Your life here in the tangible world exists only to help you realize and own that power. Each experience we have refines our concepts in relation to It.

A few years ago, I had an intimate encounter with the sun. I was working on assignment in northeastern New Mexico, a place where, with its dark night skies, celestial wonders shine brightly.

I just happened to arrive during a rare solar phenomenon. The planet Mercury was passing between us here on Earth and our sun.

It was a brilliantly clear day, in the little cowtown of Clayton, with a broad blue sky and thin plains air. I focused my eye on the viewfinder of a solarscope and there it was—a roiling mass of energy, so large it filled the whole screen. Solar flares licked off the surface as the giant mass pulsed with power. And at about one o’clock, tiny as a dust speck, passed Mercury, a planet that in the sun’s presence, diminished to near nothing. Over the next hours I watched as Mercury made its way across the great orange face. Here is what the sun whispered to me:

You are neither man nor woman.

You are neither rich nor poor.

You are neither healthy nor sick.

1. You are neither man nor woman.  Each of us has both masculine and feminine powers available to us. Through lifetimes of experience we hone the masculine, arrow-like strength and the feminine petal-like surrender—and all the powers between those poles. One day, we come to know that, as soul, we are truly neither of them.

On my trip to northeastern New Mexico, I got to flex both powers. After seeing Mercury, I headed 20 miles outside of Clayton to an observatory at a remote lake. My headlights pierced through complete darkness as I made my way, and once there I waited alone at a little hut that housed the telescope. Creatures rustled in the brush and the lake appeared black. For moments I trembled in my boots, but I called on the Divine power and found my courage.

Soon an astronomer joined me, along a few other star-gazers. We stood near the lake, the air smelling of prairie sage, and the stars so abundant the sky turned golden. My chance to surrender came next when the moon appeared. Though we had a world-class telescope in our midst, the sky became so bright that it rendered the scope nearly useless. Yet, my assignment was to write about it. I had to surrender.

I let go of my fear of failing my assignment and came into the Now. Suddenly the night became magical as the astronomer gave us a naked-eye star tour. He showed us Polaris—the pole star, always marking the direction north—and pointed to the Andromeda Galaxy, two million light-years away. As I opened further to the experience, whole galaxies became visible above me, like great wheels spinning through time. And I knew in my very core, that, as Rumi says, “Everything in the universe is within.”

As we refine our masculine and feminine tendencies, they serve us most in centering the attention at the third eye. The feminine surrenders our attachments, while the masculine guards this holy shrine.

2. You are neither rich nor poor.  Money too is an illusion of the lower worlds. When we think it is important, it dominates us, either through abundance or lack. But when you realize that you are like the sun’s rays, which neither chase after nor run from anything, you stop grabbing and simply Be that brilliant radiance.

To be honest, trips like this one to northeastern New Mexico pay very little. If I take good photos, they pay a bit more. But the Divine always brings me enough to live well.  Occasionally, I have grown fearful and chased after money—taken a job that was unfulfilling and/or too much work. In those cases, my health has suffered, as has my spiritual connection.

But when I know that I am like the sun, a massive, self-generating entity, I can relax and simply Be that power, radiating to sustain the many parts of my lower-world existence. Then my material life transforms to support my highest purpose.

3. You are neither healthy nor sick.  These physical bodies we inhabit contract viruses and infections. They fall out of alignment and hurt, they lose their strength and die. Yet like the sun, despite our pain and heartache, we shine on through lifetimes.

I have been blessed with allergies to foods and chemicals that have visited me often, manifesting with head and body aches and insomnia. They can be especially aggravated when I take trips like this one to northeastern New Mexico, where I eat diner-style food and sleep in musty motel rooms perfumed with air fresheners.

Over the years, I have tried nearly everything offered to me, only to find most remedies aggravate the symptoms. Only the Divine seems to hold the answer. As Rumi says, “Your pain is your cure.” I have seen that my pain is due to separation from my Divine self, and my cure is to Be with that self. Through this, I have been gifted with new work doing this “Inner Adventure” writing, which suits my higher and lower bodies better, and the allergies are disappearing.

On my way home across New Mexico’s broad plains, I saw antelope grazing and a Red-tailed hawk riding an updraft. Suddenly I came to a place that reminded me why they call this area The Big Empty. Around me was nothing, the land completely flat without a single mountain or telephone pole, just tan grass and the big sun shining above me. And in that moment I felt the freedom of a life that identifies with no condition or thing.

In truth, you are not the sun—it will one day burn itself out. You, dear one, are the eternal essence of Divine love.