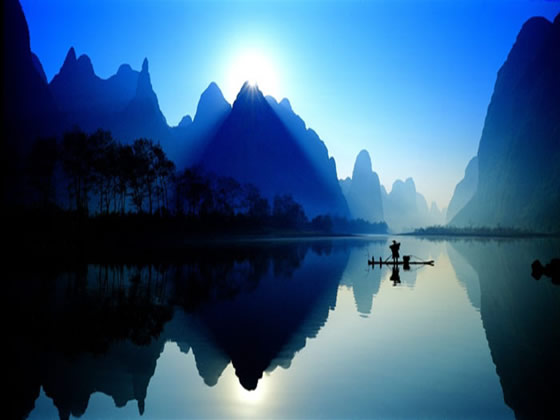 We are each adventurers on an eternal quest to know the Holy Grail that is our true self. I began to understand this after I lost my loved ones. I was completely adrift. It seemed that all my sources of love had disappeared. And the losses continued.

My mother bottomed out on alcohol and my fiancé betrayed our trust. I found myself with no money in the bank and struggling with an illness. One snowy winter night, I wanted nothing but to die. For the first time in my life, I called out to the Divine for help. I didn’t believe in any power but my own, but I called anyway.

Within a few days, I found myself in Arizona at a treatment center, where my mother had been admitted. The counselors there gave me an ultimatum: I could continue my miserable life as it was—drinking more wine than I should, relying too much on my mate for happiness, and staying so busy that I had no time for myself—or, I could follow the simple plan they outlined.

I went into the desert and, while the sun burned scarlet on the horizon, made the choice to change. My life took off like a Thunderbird from there. The transformation centered around three steps.

Emerged From My Cave

Leaped Off the Cliff

Danced to the Sweet Melody

Emerged From My Cave  As I tottered into my new life, all kinds of books came into my hands, through the 12-Step programs I was attending, through counselors and friends. Like a starving soul with its first taste of food, I consumed them. I learned about codependency, the futility of controlling others and, most of all, the power of the Divine. That infinite source was reprogramming my mind, which had run along very calcified channels about where love comes from and what I should do with my life.

At that time, my life had a dark, cave-like atmosphere, but it began to change. Our outer lives are merely a reflection of our inner, so of course the melancholia began to lift. I lived in a ratty apartment that had once been a tavern. But very quickly even that setting took on a brightness, as I met new friends and engaged in life in a new way.

Leaped Off the Cliff  Each day during this time, I turned my will over to the Divine. I learned to suspend my thoughts from ideas about how each day, each moment, should be, and let God determine the outcomes. I surrendered my mother’s drinking and the desire to marry my fiancé. But most of all, I let go of who I thought I was.

As I became willing to emerge from my little cave of ideas, the Divine opened for me a whole universe of opportunity. Suddenly, I had the desire to see the world—to travel, to adventure. I still had no money, but I found a photo of graceful pyramidal peaks in Guilin, China, that I taped to a wall in my apartment. Within six months, miraculously, I was on boat on the Li River passing through those very hills. I had found a teaching job in Korea that paid enough so that I could travel, including to Thailand, Borneo, Bali and Africa.

My inner world had split open and my outer became astronomical.

Most importantly, my reliance on the Divine quickened my heart. It felt dangerous, as though every morning I were leaping off a cliff and would soar through my day, caught only when I would land in bed each night, panting with the electric excitement of the unknown. Everything was new and sparkled with a shiny glow.

At times I cried as past images arose in my consciousness, to be addressed with the Divine. Even more, I laughed as I adventured to little temples in Korea’s misty hills, to a hidden surf spot accessed through caves in Bali, and to a lion’s lair while on safari in Africa. Every pore of my being tingled with life, while my love for the Divine deepened.

Danced to the Sweet Melody As I continued my reading and devotion, I became tuned like an instrument so that I could hear the quiet nudges of guidance. Often they would come at dawn when my mind was quiet, or after my morning contemplation. Sometimes, the messages went against what I thought I should do.

I heard the call to return to the U.S. and began applying for jobs. I had been offered a teaching position in California, but while trying to fill out the paperwork, I kept making mistakes. After hours of struggling, I put my head on the typewriter and cried. I knew I had to go back to New Mexico—the place where the pain seemed to reside. Though I didn’t know it then, I would meet not only the family karma I had left behind, but also a teacher who would guide me through it.

For me, the spiritual walk is this: the mind reprograms, opens up new avenues so that the Divine can redirect us. We learn to dance to the current of love, what the mystics call the Sound. This melody permeates everything but can only be contacted by those willing to give up everything to hear its sweet whisper.

Then we follow the whisper into the rarefied regions that are free of pain and heartache because there all attachment to duality disappears. When I am resonating with this soul place, I know there is no good, nor bad. My devotion to alcohol was perfect because it brought me to the Divine. My lost loves were also perfect because those experiences taught me to love the true Source of my joy and security.

That sparkly sense of danger, the excitement of turning my will over to the Divine, remains with me, even some 25 years later. Each day, I leap off the cliff and soar with my Beloved, knowing that really I never, ever have to land.